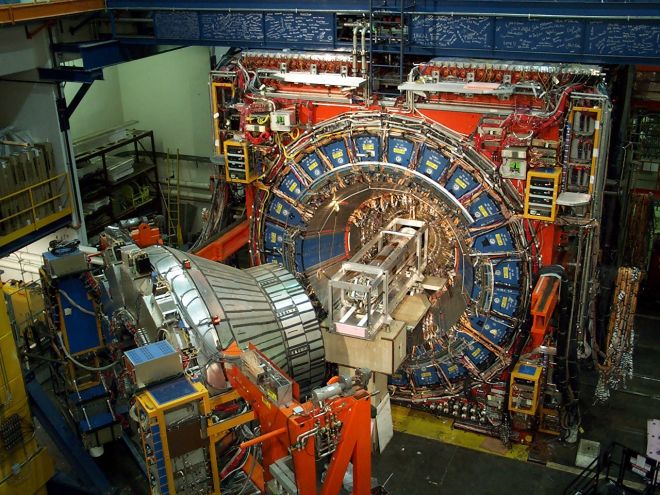 From a Noetic Science experiment in 1988:

“The human soul weighs 1/3,000th of an ounce! That’s the astonishing claim of East German researchers who recently weighed more than 200 terminally ill patients just before, and immediately after, their deaths.”

That’s the astonishing claim of East German researchers who recently weighed more than 200 terminally ill patients just before, and immediately after, their deaths. 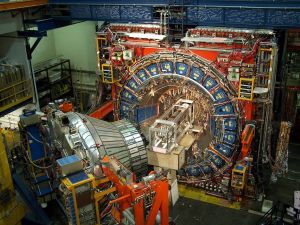 “The inescapable conclusion is that we have now confirmed the existence of the human soul and determined its weight,” Dr. Becker Mertens of Dresden said in a letter printed in the German science journal Horizon.

“The challenge before us now is to figure out exactly what the soul is composed of”, he continued. “We are inclined to believe that it is a form of energy. “But our attempts to identify this energy have been unsuccessful to date.”

The expert’s report, co-authored by physicist Elke Fisher, got mixed reviews from top scientists around the world. Gerard Voisart, the leading French pathologist, was especially critical, saying that the weight difference between the living and the dead could be accounted for by air leaving the lungs. But Drs. Fisher and Mertens said they took that into account in making their calculations. They further stated that the device they used to weigh the soul has a margin of error of less than 1/100,000th of an ounce.

“It occurred to us that the weight loss could be the result of an instantaneous physical deterioration,” said Dr. Fisher. “But after exhaustive study, we agreed that was not the case. The only possible explanation is that we were measuring the loss of the human soul or some kind of life force.”

The communist scientists were careful not to link their study of the soul with a superior being or with the afterlife. But church leaders contacted by the European press said the experts’ report confirmed the existence of God and heaven–and praised their breakthrough research.

“It’s ironic that communist scientists would conduct a search for the soul, much less declare that they found it,” said one clergyman.

Repeated attempts to get an official statement from the Vatican were unsuccessful. But one highly placed source said Pope John Paul II was aware of the German study. And he reportedly was most impressed. “The Roman Catholic Church has never concerned itself with the weight of the soul, but we are pleased with scientific confirmation of its existence,” the source said.

From the tabloid, Weekly World News, Nov. 8, 1988. By Ragan Dunn. This story appeared in the same issue as a story headlined, “Painting of Elvis weeps real tears”, and “Psychic makes river run backward”. 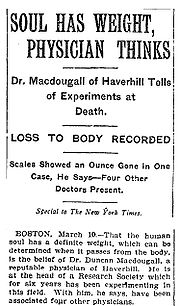 In the earliest 20th century, Dr. Duncan McDougall measured the human soul at 21 grams. (The movie 21 Grams is based on the same findings).

In 1907, MacDougall weighed six patients while they were in the process of dying from tuberculosis in an old age home. It was relatively easy to determine when death was only a few hours away, and at this point, the entire bed was placed on an industrial-sized scale that was apparently sensitive to the gram. He took his results (a varying amount of perceived mass loss in most of the six cases) to support his hypothesis that the soul had mass, and when the soul departed the body, so did this mass. The determination of the soul weighing 21 grams was based on the average loss of mass in the six patients. Other studies were soon put forward to confirm the results. Experiments on mice and other animals took place. Most notably the weighing upon the death of sheep seemed to create mass for a few minutes which later disappeared. The hypothesis was made that a soul portal formed upon death which then whisked the soul away. 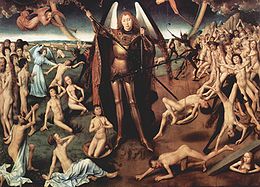 In the Roman Catholic Church, Saint Michael has four main roles or offices. He is the Christian angel of death, carrying the souls of all the deceased to heaven, where they are weighed in his perfectly balanced scales (hence Michael is often depicted holding scales). At the hour of death, Michael descends and gives each soul the chance to redeem itself before passing, thus consternating the devil and his minions. St Michael is the special patron of the Chosen People in the Old Testament and is the guardian of the Church; it was thus not unusual for the angel to be revered by the military orders of knights during the Middle Ages. Last, he is the supreme enemy of Satan and the fallen angels. 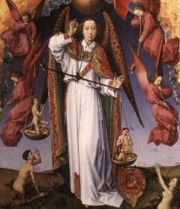 80 thoughts on “Weighing The Human Soul”